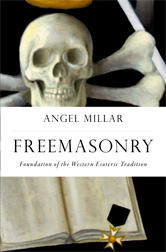 Historian of Freemasonry and author Angel Millar returns to the show in podcast episode 151 to discuss his recently published book Freemasonry: Foundation of the Western Esoteric Tradition, available from Salamander and Sons. Millar was our guest previously in podcast episode 50 and he’s also the man behind People of Shambhala, a webzine dedicated to understanding the body and spirit in modernity, from meditation to martial arts, lifestyle to subcultures, philosophy to spirituality, and more. Angel Millar is the author of Freemasonry: A History (Thunder Bay / Greenwich Editions, 2005). His articles on Freemasonry and the esoteric, and related subjects, have also been published in the Journal of Indo-European Studies, Philalethes, The Transactions of the American Lodge of Research, The Empire State Mason, and The Compleat Master (Grand Lodge of New York’s textbook for Masters of Lodges), among others. Millar has also presented lectures to Masonic Lodges, the Philosophy Department of Mensa NY, and The Chancellor Robert R Livingston Masonic Library of Grand Lodge, NY. He was initiated into Freemasonry in late 2001, and raised to the sublime Degree of Master Mason in 2002. Millar later joined two invitational Masonic bodies, and took the Royal Arch and Knights Templar Degrees. He is also currently a full member of the European Society for the Study of Western Esotericism. In the early 18th century the Masonic fraternity emerged to change the shape of the Western esoteric tradition forever. Within a few decades the fraternity had spawned numerous esoteric societies that claimed to communicate with spirits, teach the secrets of alchemy, and to perform rituals of healing. During the next century the still-surviving Masonic Rosicrucian society was established, attracting the founders of the Hermetic Order of the Golden Dawn – William Wynn Westcott and S.L. MacGregor Mathers – and Theodor Reuss, co-founder of the Ordo Templi Orientis (O.T.O.), among others.

Freemasonry: Foundation of the Western Esoteric Tradition explores the history of Western esotericism, beginning with the early Masonic Ritual, and its symbolism of natural law and death, essential to understanding the Craft, high-Degree Freemasonry, and the contemporary Western esoteric tradition. Other subjects explored include:

Millar also has a new book coming out soon that deals with the intersections between Islam and Freemasonry. Entitled The Crescent and the Compass, this work is remarkably revealing, timely, and important. We spend the last portion of the interview discussing this soon to be released book.

In the Occult of Personality Membership Section, Angel Millar continues discussing his work contained in Freemasonry: Foundation of the Western Esoteric Tradition including his observations about the reversal of what is esoteric and what is exoteric in modern times, the influence of traditionalist philosophy, more about Aleister Crowley’s Masonic adventures, and even Freemasonry as a conduit for the Mysteries of the Runes. Don’t miss that fascinating conversation. Just go to occultofpersonality.net/membership and sign up if you haven’t already. It’s the best way to support the podcast while receiving access to a tremendous amount of additional exclusive content.

Occult of Personality Podcast 50 – Freemasonry and the Western Esoteric Tradition