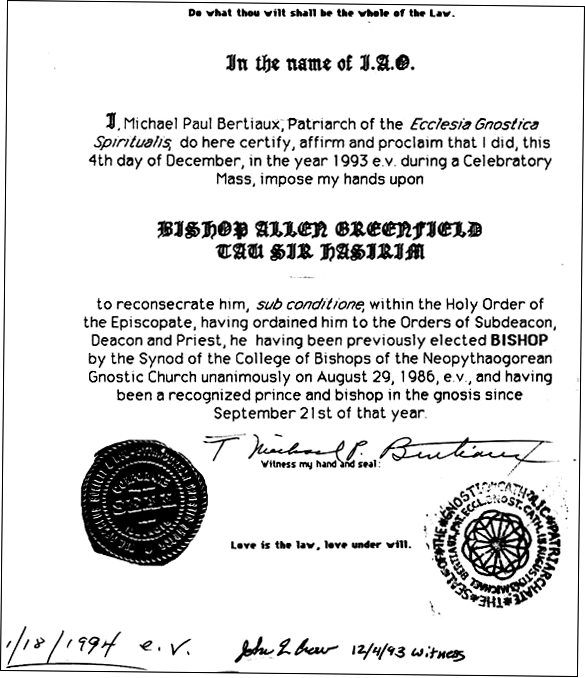 T Allen Greenfield returns to the show in podcast episode 120 to discuss congregational illuminism. Information about T Allen’s previous appearances can be found here, including podcast episode 57 – Congregational Illuminism and Points Chaud, which is a primer on the subject. Congregational illuminism refers to a free approach to illumination by initiates working in a loose association since approximately 2006. Greenfield has helped facilitate this approach and is one of its most vocal advocates. Greenfield begins the interview by describing the extraordinary growth of the congregational illuminist ‘movement’ in the past several years. Next, he talks about the historical origins beginning with “heretical gnostic masses” in northern California, the neo-Thelemic Ordo QBLH, and the establishment of the EGnU in 2000. The authority to do this Work stems from Greenfield’s consecration as a gnostic bishop in 1986 by the Neopythagorean Gnostic Church and charter for a philosophical research lodge of the Ancient and Primitive Rite of Memphis-Misraim in 1992 by Michael Bertiaux. Greenfield expounds on the four tenets of congregational illuminism:

We discuss how some of those involved with congregational illuminism are working simultaneously, for various reasons, within hierarchical organizations. While this may seem contradictory on the surface, the reasons for this primarily extend from existing loyalties. Greenfield notes that free illuminism is a radical and experimental approach to spirituality and he believes it should be viewed as a threat by hierarchical organizations. Greenfield also discusses how congregational illuminism diverges from the traditional master-student relationship. He expresses the idea that a radically new approach to illumination is required in order to allow for independent growth, while still providing initiation and guidance without hierarchy. Then we discuss the need for decentralization without authority in spirituality and some of the historical antecedents including Protestant Congregational churches formed in England beginning in the sixteenth century and the nineteenth-century Gnostic revival movement. Tau Allen shares his personal experience working with those involved in congregational illuminism and his level of comfort with the lack of competitiveness. We also discuss the diverse and eclectic Work that various congregational illuminist bodies are engaged in, from points chaud and gnostic voudon to Egyptian Freemasonry and all sorts of mystical and magickal endeavors in between.

In the Occult of Personality Membership Section, T Allen Greenfield describes the Great Prague Working of 2010, an esoteric tour de force with profound implications for a new generation of European illuminists.

outro music – “Land Beyond the Night” by Aarni