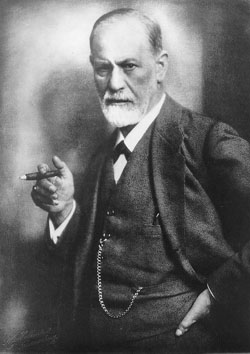 Regarding the occult, Dr. Freud wrote “if I were at the beginning rather than at the end of a scientific career … I might possibly choose just this field of research, in spite of all difficulties”.[1] Dr. Sigmund Freud has been called one of the most influential thinkers in western civilization. He is the originator of, or contributor to, many concepts; including psychoanalysis, psycho-sexual development, and is a widely recognized historical figure in the Western world. His ideas are recognized and taught at many levels of academia.

What is not as widely recognized is Freud’s great interest in the occult. A man who was a member of the elite in many respects, was not just a dabbler, but was completely immersed in the subject. Luckily for us, the legacy of his interest was documented to some degree.

Freud was fascinated by ancient civilizations. His collection of artifacts and relics was quite extensive, and later in his life, he refused to travel without his collection.[2] These items are said to have included:

“… more than 2,000 statues, vases, reliefs, busts, fragments of papyrus, rings, precious stones and prints. In Freud’s study at Berggasse 19, Vienna, every available surface was so crowded with antiquities that he barely had room to move.

Pieces from Freud’s collection can be viewed at the Freud Museum and are quite marvelous.

Is it possible that components of Freud’s theory about dream interpretation derived from his occult research? At least one scholar thinks so. He spent considerable effort investigating the phenomena of mental telepathy and thought transference.[4] He was also a practitioner of the Tarot. The implications of the connections between Tarot and psychology have been investigated by Dr. Arthur Rosengarten, who concludes that the Jungian school of thought is a better way to integrate the symbolism inherent in the two studies.[5] The doctor’s interest in esoteric subjects was seemingly passoinate and it informed his professional work to some degree based on this information, as well as affecting its acceptance at times.

Dr. Freud was a member of the Vienna lodge of the B’nai B’rith (Sons of the Covenant), joining in 1897. It has been written that this association comforted him greatly during his time as an outcast over his theories of dream interpretation.[6] In 2004, there was a lodge in Paris dedicated and named after him.[7]

“Freud said that there were two subjects that always baffled him: the occult and the identity of Shakespeare. Late in his life, he read about the Oxfordian view of Shakespeare, and became quite certain that Shakespeare was the pen name of the Earl of Oxford. But he never attained any certainty regarding the occult, though he did become more receptive to the occult in the latter part of his career. Ernest Jones describes Freud’s position on the occult as “an exquisite oscillation between skepticism and credulity so striking that it is possible to quote just as many pieces of evidence in support of his doubt concerning occult beliefs as of his adherence to them.”[8]

“It is wrong to regard Freud as a rationalist who rejected the occult outright; Freud listened to the arguments in favor of the occult, and he believed in the occult, at least partly. It should be remembered that Freud’s theory of life- and death-instincts, which looms large in his later work, is mystical rather than materialistic. Freud was a great thinker, a thinker willing to go beyond the visible world, and enter the realm of the invisible and the mysterious.”[9]

Perhaps “…the best explanation of why people believe in the occult was offered by Freud himself in “Psychoanalysis and Telepathy.” He stated that this type of belief was an attempt to regain by supernatural means “the lost appeal of life on this earth.”[10][11]