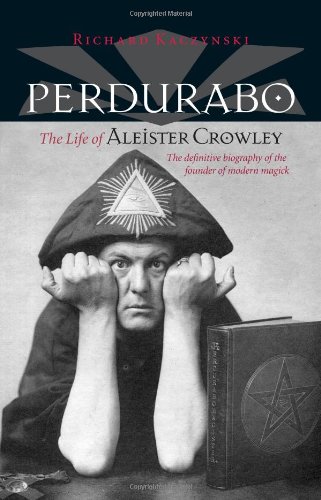 Scholar and author Richard Kaczynski is our guest in podcast episode 122.

“Richard Kaczynski, Ph.D., has been a student of the Western Hermetic tradition since 1978, and has lectured internationally on these topics since 1990. His writing has appeared in numerous magazines and books. A research scientist and statistician with the VA Northeast Program Evaluation Center, Kaczynski is also affiliated with Yale University’s School of Medicine (Department of Psychiatry).”

Richard authored Perdurabo: The Life of Aleister Crowley, the definitive biography of the Great Beast 666, which was published in a revised and expanded version in 2010 by North Atlantic Books.

“Perdurabo traces Aleister Crowley’s remarkable journey from his birth as the only son of a wealthy lay preacher to his death in a boarding house as the world’s foremost authority on magick. Along the way, he rebels against his conservative religious upbringing; befriends famous artists, writers, and philosophers (and becomes a poet himself); is attacked for his practice of “the black arts”; and teaches that science and magick can work together. A tireless magician, prophet, poet, and adventurer, Crowley has inspired generations of social and spiritual truth-seekers and has shaped modern popular culture through his philosophy of “Do what thou wilt shall be the whole of the Law,” making him one of the most colorful and fascinating characters of the twentieth century. Taking an evenhanded and accessible approach to an extremely controversial figure, author Richard Kaczynski draws from his extensive academic and personal expertise with the subject matter, including over twenty years of research, to present Crowley’s story in a way that is unmatched by any other biographer. Featuring over 150 pages of new material–including previously unpublished biographical details and rare never-before-seen photographs–this revised and expanded edition paints an illuminating and memorable biography of the man who inspired the counterculture and influenced generations of artists, punks, wiccans, and other denizens of the demimonde.”

These show notes typically attempt to describe the interview, however, I’d prefer you listen to Richard and I discuss his research and insights about Aleister Crowley rather than attempt to describe them here. This interview runs about an hour and twenty minutes or so because it was necessary to have an extended amount of time to devote to Crowley and Kaczynski’s marvelous book about him. Contained within are Kaczynski’s thoughts about Crowley, and as the foremost authority on the subject (based on this biography), it is not only interesting, but invaluable.

I cannot praise Perdurabo: The Life of Aleister Crowley enough. It is perhaps the most insightful and well-researched biography of any historical figure of the Western esoteric tradition and I highly recommend it to you. But don’t just take my word for it – read some of the praise for Kaczynski’s work from far more authoritative sources:

“I’ve avidly devoured biographies of Aleister Crowley since my teens, because like other great artists (such as Oscar Wilde), half his genius went into his life. Perdurabo is undoubtedly the most complete and best researched of all the biographies, yet manages to be un-put-downable, tragic as well as laugh-out-loud funny — and best of all, it takes the Magick seriously.”

“This is truly an impressive biography of one of the most remarkable thinkers of the twentieth century. In this revised edition of Perdurabo, Richard Kaczynski takes readers through The Beast’s amazing life and work in a sympathetic and compelling fashion. It is an effective combination of erudition and accessibility that will remain the standard biography on Crowley for years to come.”

“Perdurabo is the result of many years of painstaking research. Dr. Kaczynski has been able to uncover a host of previously unexplored sources which cast new light on Aleister Crowley’s life and works. Some of them are presented here for the first time in this revised edition of the book. It is an achievement that deserves praise and I am sure the book will be used by scholars and students for many years to come as an indispensable reference work.”

— Marco Pasi, Assistant Professor at the Center for the History of Hermetic philosophy and related currents, University of Amsterdam, and author of Aleister Crowley and the Temptation of Politics

“Richard Kaczynski’s Perdurabo: The Life of Aleister Crowley is a meticulously researched biography of a person whose reputation has been distorted by a long-perpetuated tradition of slanders, rumours, and misinformation. In this revised version of a book that has already achieved the status of a classic, Crowley emerges as a complex, controversial, troubled, and even tragic figure, which is to be expected of somebody who has consistently and with a gusto challenged contemporary conventions and prejudices. What Kaczynski makes clear, however, is that the driving force behind Crowley’s life and thought is not a sinister perversion of a ‘Satanist’ – a gross but still common misconception – but an attempt to live in accordance with the religious and philosophical tenets of Thelema, of which Crowley believed himself to be the Prophet. The book also provides a wealth of material related to Crowley’s very wide and typically artistic and bohemian social circle. Crowley will probably remain a controversial figure for many, but the readers of Perdurabo will be in a position to assess his life and work based on evidence, and Kaczynski should be congratulated for providing it in abundance.”

— Gordan Djurdjevic, Sessional Lecturer, Simon Fraser University, and author of Masters of Magical Powers: The Nāth Yogis in the Light of Esoteric Notions

Richard also authored The Weiser Concise Guide to Aleister Crowley which, in addition to a biographical sketch, also offers some of Crowley’s teachings in his own words covering subjects like “concentration, meditation, magick, invocation, [and] even sex magick.” Kaczynski has also recently published The Forgotten Templars about the early history of the Ordo Templi Orientis. Based on the strength of Perdurabo, I would also recommend this book as well. Richard’s scholarship and writing set a very high standard for historical expositions in the field of Western esotericism and Magick. What more can I say? Listen to the interview, and if you haven’t already, read his books.

Perdurabo: The Life of Aleister Crowley by Richard Kaczynski

The Weiser Concise Guide to Aleister Crowley by Richard Kaczynski

The Libri of Aleister Crowley

The Occult of Personality Membership Section (a great way to support the show) features new content like “The Roots of Modern Magick with T Allen Greenfield,” The Revelation of the Shechinah (a Masonic Rosicrucian book), and “Esotericism in Colonial Pennsylvania Redux.”