Robert Sullivan and The Royal Arch of Enoch 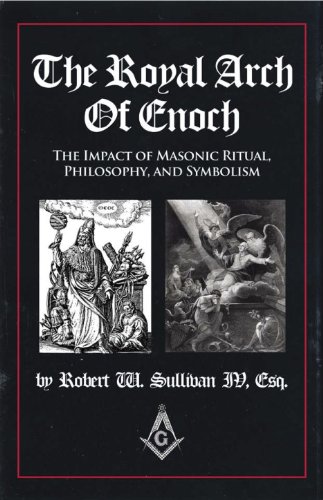 Robert W. Sullivan IV, author of The Royal Arch of Enoch: The Impact of Masonic Ritual, Philosophy, and Symbolism, is our guest in podcast episode 146. Sullivan’s book, The Royal Arch of Enoch, argues that a high degree Masonic Ritual, developed in France in the eighteenth century, included elements of the Book of Enoch (AKA 1 Enoch) which was considered lost until Freemason and traveler James Bruce returned to Europe with copies from Ethiopia in 1773. These copies were supposedly not translated into English until 1821. Sullivan also documents the symbolic restoration of the Sun as the premier icon in all of Freemasonry and as the supreme emblem of imperial administration and religiosity lifted from the Ancient Mysteries, incorporated in the Abrahamic faiths, and carried on in both Blue Lodge and High Degree Masonry. Sullivan begins the interview describing how his esoteric interests, especially Freemasonry, were stimulated by studying Frances Yates’ writings while studying at Oxford University as a young man. Then he describes his journey to compose The Royal Arch of Enoch, a voluminous tome that clocks in at about 700 pages. His central thesis about the Holy Royal Arch Masonic degree(s) being derived from 1 Enoch associates the origins of Freemasonry with the Watchers, or fallen angels, and is therefore somewhat controversial. In addition to the origins of the Royal Arch degree ritual, Sullivan also concentrates on the disparate philosophical streams that influenced Freemasonry, especially those of the Roman Catholic Counter-Reformation.

“… [B]oth systems (Craft Masonry and the High Degrees) were able to posit a view of mechanistic oneness as the end point of society which identified de-facto heresy with the solar drive to eliminate imperfection through Tridentine Counter Reformation militancy and high degree Masonic rituality. The Counter Reformation was begun at the Council of Trent between 1545 an 1563 at the close of the Thirty Years War. Its purpose consisted of four major elements: 1) Religious Orders, 2) Ecclesiastical Reconfiguration, 3) Spiritual Movements, and 4) Political Dimensions. It was, essentially, a reactionary movement based on the Protestant Reformation of Martin Luther seeking to discourage, infiltrate, and thwart Protestantism at both outward (Baroque art and architecture) and secret levels. It is this thread or nexus between the Masonic High Degrees and the Catholic Revival that has fed so many wrong and confused theories of Illuminati-Masonic rooted conspiracies over the years. The more sober reality however is not dark conspiracy but a profound and subterranean alliance between Catholic magisterium and apologetics and the “cooler, rational mystique of ancient texts” to provide mythic legitimacy for the principle agenda of modernity – to recreate society along heliocentric lines at a metaphysical and therefore confessional levels through the shift from Pythagoras, Archimedes, and Ptolemy to Copernicus, Kepler, Galileo, and Newton. Since Masonic Law through the conceptual endpoint of initiation, the Royal Arch restoration of the lost name of God came ultimately to serve a numinous mission of managing access to the ineffable name of God, naming through the symbolism and metaphors of mechanism became a primary method of the Fraternity cultural dynamic. In the United States, through the teaching of military and civil engineering at West Point and Union College, both deeply steeped in Masonic culture … the mechanistic idiom was extended through canalization, railroading and telegraphy into the American frontier. Similarly, the same inventions in Britain coupled with the heritage of empire and navigation, the symbolic naming process was extended through the powerful capacities of imperial forces to establish persuasive hegemonies over undeveloped regions.” – Robert W. Sullivan IV, Introduction to The Royal Arch of Enoch, p. xxxvii-xxxviii I enjoyed and appreciated Robert Sullivan’s The Royal Arch of Enoch. His investigations into the religious, symbolic, philosophical, and mythic roots of Freemasonry are commendable. This book is a must read for anyone interested in a serious exposition on the philosophies behind Freemasonry and the way in which these ideas influenced Masons with regard to the evolution of the Fraternity as well as the greater historical and social implications. In many respects, the book reads like an academic treatise, but Sullivan also extends his exploration of Masonic symbolism into the present day, pointing out the ubiquitous nature of esoteric symbolism in mainstream culture, especially the entertainment industry. Despite the uncertainties some may have [about the main thesis], The Royal Arch of Enoch is worthy of a spot on your book shelf.

In the Occult of Personality Membership Section, Robert Sullivan discusses the York Rite of American Freemasonry, Masonic conspiracies including the Morgan affair, the perceived lack of esoteric interest amongst older Masons, Masonic research standards, and much more. Join us for that fascinating conversation!

“The Lost Word Made Whole – Jesuits, Illuminism, and the Royal Arch of Enoch with Robert W. Sullivan IV”

“Royal Arch of Enoch or Master of the Ninth Arch: The Thirteenth Grade of the Ancient and Accepted Scottish Rite, and the Tenth Degree of the Ineffable Series”

“The Lectures of the Holy Royal Arch”

“The Mystery of the Royal Arch Word” by Arturo de Hoyos, 33rd degree, published in Heredom – The Transactions of the Scottish Rite Research Society, Vol. 2, 1993

Giordano Bruno and the Hermetic Tradition by Frances A. Yates

The Rosicrucian Enlightenment by Frances Yates

The Occult Philosophy in the Elizabethan Age by Frances Yates

The Art of Memory by Frances A. Yates

outro music – “The Wasp and the Flame” by Rob Johnson Music