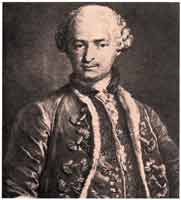 Although the 18th century is often referred to as the “Age of Reason and Enlightenment” in the history books of Western civilization, the prevalence of mysticism and occult studies was also alive and well. The resurgence in the ideals of Alchemy and Hermetics were in full bloom in Western Europe and their colonies as evidenced by the study of important historical figures; from George Washington and Benjamin Franklin to Voltaire and Rousseau and so many more. It is actually a very interesting dichotomy in that some occult philosophies predominant in this time period did actually seek to improve and progress humanity, although their motivations and methods may seem so antiquated as to be incomprehensible to some and questionable, at best, to others. No doubt one of the most interesting, being the most mysterious, was the Comte de St. Germain. The Comte de St. Germain appeared in European diplomatic circles during the early part of the 18th century. He was said to be a supreme linguist, having mastered German, English, Italian, Portuguese, Spanish, French with a Piedmontese accent, Greek, Latin, Sanskrit, Arabic, and Chinese. His scholarly accomplishments were equally as legendary since he was a master of history, poetry, art, music, and chemistry. He played several musical instruments and composed numerous pieces. It is said that his recollection of history was that of one who witnessed it, not read it, for over 2,000 years during which he played many important roles. His knowledge of chemistry and physical sciences was such that he was able to repeatedly remove flaws from precious stones and trasmute silver into gold. His prophetic utterances were legendary and his influence great and far-reaching. St. Germain was employed by a number of governments, including France, as a secret agent providing him access to the most exclusive circles of society, making him not only an acquaintance of royalty, but a confidant. As such a talented and accomplished man, St. Germain was able to masquerade as other persons for many years. In her excellent book, “The Comte de St. Germain, the Secret of Kings”, Isabel Cooper-Oakley describes the identities and names he used in the pursuance of his secret activities, be they political or otherwise.In addition to all those worldly skills that St. Germain was master of, he was perhaps even more skilled and masterful with regard to the occult arts. He helped to developed the techniques of mesmerism and was said to be a skilled clairvoyant and telepath. He was a Master Alchemist and a crucially linked with early activities of the Freemasons. He was also confirmed to be a Templar and even initiated Cagliostro into the order. St. Germain was thoroughly familiar with all the doctrines of eastern mysticism as well, including Buddhism and Hindu practices. There are even significant proposals that St. Germain was the mysterious head of the Rosicrucian fraternity, Christian Rosenkruetz. It is also rumored that he was Prince Rakoczy of Transylvania, the Comte de Gabalis, and as Count Hompesch was the last Grand Master of the Knights of Malta according to Theosophical writer E. Francis Udny. He was also a master illuminist, not only well-versed in the “enlightenment” philosophies of the day, but a disseminator of the doctrine as well. Most of his close associates were high Masons and he was a master of Freemasonic lore. St. Germain is believed to have authored the rare and mysterious occult text, “La Tres Sainte Trinosophie”. It’s title means the Most Holy Three-fold Wisdom and the book is, “an allegorical alchemistry work and ritual Egyptian magickal treatise containing an intentionally coded text with Arabic, Chaldean Hebrew, Cuneiform, Ionic Greek, Syriac, esoteric idiograms and heiroglyphs amongst the French writing.” Perhaps the most intriguing of all was Manly Hall’s description of St.-Germain’s purpose. “At various times he admitted that he was obeying the orders of a power higher and greater than himself. What he did not say was that this superior power was the Mystery school which had sent him into the world to accomplish a definite mission. The Comte de St. Germain and Sir Francis Bacon are the two greatest emissaries sent into the world by the Secret Brotherhood in the last thousand years.“In the article entitled, “The Immortal German Alchemist,” Reginald Merton describes that St. Germain, although he moved in the same circles, may have had a different idea about the purpose of the Great Work: “The Comtesse d’Adhemar quotes a letter she received from Saint-Germain in which he says, speaking of his journey to Paris in 1789, “I wished to see the work that that demon of hell, Cagliostro, has prepared.” It seems that Cagliostro took part in the preparation of the revolutionary movement, which Saint-Germain tried to check by developing mystical ideas among the most advanced men of the period. He had foreseen the chaos of the last years of the eighteenth century and hoped to give it a turn in the direction of peace by spreading among its future promoters a philosophy that might change them. But he reckoned without the slowness with which the soul of man develops and without the aversion that man brings to the task. And he left out of his calculations the powerful reactions of hatred.”

Through his association with the American revolutionaries, particulalry Benjamin Franklin by way of Nine Sisters Lodge in Paris, but also many others, St. Germain’s connections to the revolutionaries is well established. When considered in conjunction with the fact that the Rosicrucian fraternity was the impetus for this “fire in the minds of men,” the information about to be imparted below this paragraph takes on additional gravity. According to Manly Hall, “The Fraternity of R.C. is an august and sovereign body, arbitrarily manipulating the symbols of alchemy, Qabalism, astrology, and magic to the attainment of its own peculiar purposes, but entirely independent of the cults whose terminology it employs. The abolition all monarchical forms of government and the substitution therefor of the rulership of the philosophic elect. The present democracies are the direct outgrowth of Rosicrucian efforts to liberate the masses from the domination of despotism. In the early part of the eighteenth century the Rosicrucians turned their attention to the new American Colonies, then forming the nucleus of a great nation in the New World. The American War of Independence represents their first great political experiment and resulted in the establishment of a national government founded upon the fundamental principles of divine and natural law. As an imperishable reminder of their sub rosa activities, the Rosicrucians left the Great Seal of the United States. The Rosicrucians were also the instigators of the French Revolution, but in this instance were not wholly successful, owing to the fact that the fanaticism of the revolutionists could not be controlled and the Reign of Terror ensued.”

Although by the time of the French Revolution, St. Germain seems to have had a rather low opinion of the revolutionaries in his midst, it was not always the case. Based on the research of Manly Hall, as well as Dr. Raymond W. Bernard in “Great Secret Count St. Germain”, it may very well have been St. Germain who secretly designed the American flag and was the mystery man who appeared in the chamber prior to the signing of the Declaration of Independence. A man known only as “the Professor” was invited by the founders to participate in the design of the flag and his description fits that of St. Germain exactly. Also, on July 4, 1776 in Philadelphia, the City of the Love of Brotherhood, the signers gathered to supposedly formalize the severing of ties to their colonial masters. During the debate, a stranger entered the chamber and spoke loudly to sway the argument. His final words were said to be, “God has given America to be free!” after which a wild enthusiasm erupted and the Declaration was signed. Again, like “the Professor,” nothing is supposedly known of the identity of this mysterious gentleman. But when analyzing history, it is clear to many scholars that the man known as Comte de St. Germain was the mystery man. There is also speculation that he was directly responsible for the creation of the Great Seal of the United States of America. Beyond this, of course, there is much discussion of St. Germain as an Ascended Master and all that entails. This seems to be an explanation that many familiar with the occult espouse. Although it might seem quite far-fetched, the specific history of his life and exploits when combined with his wisdom and ageless appearance lead many to that conclusion. The Wisdom that the Comte de St. Germain represents is timeless and his life and teachings are an inspiration to many spiritual aspirants.

Information from the following sources: